Autocross is a form of motorsports that emphasizes safe, low-cost competition and active participation. An autocross is a timed competition where drivers navigate one at a time through a temporary course marked by traffic cones, rather than racing on a track with multiple other cars, as in road racing or oval racing. Autocross tends to place more emphasis on car handling and driver skill than on sheer horsepower, and events typically have many classes which allow almost any vehicle, from economy sedans to purpose-built vehicles, to compete. Speeds are slower in absolute terms when compared to other forms of motorsports, usually not exceeding highway speeds, but the activity level (measured in discrete turns per minute) can be higher than even Formula One due to the large number of elements packed into each course. Autocross courses are typically 40 to 70 seconds in length. In addition to being a national-level motorsport in its own right, autocrossing is a good way to learn skills that transfer to road racing, as drivers learn vehicle control and club ethics.

Autocross events are usually held in large paved areas like parking lots or airfields. Typically, new courses are created for each event so drivers must learn a new course each time they compete. Prior to driving, a competitor will walk the course, taking mental notes, and developing a strategy to be refined upon subsequent runs. National organizations such as the Sports Car Club of America (SCCA) and National Auto Sport Association (NASA) sponsor autocross events throughout the United States, and many areas have independent autocross clubs. Automobile manufacturers and their associated clubs (e.g. the BMW Car Club of America) sometimes hold marque autocross events. 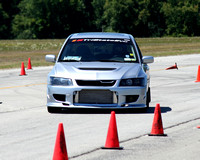