Merk Veterinary Manual:
Papilloma viruses are small, double-stranded DNA viruses of the Papovaviridae family. Some mammals have several distinct papilloma viruses—humans have >20; cattle, 6; dogs, 3; and rabbits, 2. Different papilloma viruses often have considerable species, site, and histologic specificity. The virus is transmitted by direct contact, fomites, and possibly by insects. Papillomas have been reported in all domestic animals, birds, and fish. Multiple papillomas (papillomatosis) of skin or mucosal surfaces generally are seen in younger animals and are usually caused by viruses. Papillomatosis is most common in cattle, horses, and dogs. Single papillomas are more frequent in older animals, but they may not always be caused by viral infection. When lesions are multiple, they may be sufficiently characteristic to confirm the diagnosis; however, there are many simulants of warts, and a definitive diagnosis requires identification of the virus or its cytopathic effects on individual cells—a change known as koilocytic atypia or koilocytosis.

In dogs, 3 clinical presentations of canine papilloma virus infection have been described. The first is canine mucous membrane papillomatosis, which primarily affects young dogs. It is characterized by the presence of multiple warts on oral mucous membranes from lips to (occasionally) the esophagus and on the conjunctival mucous membranes and adjacent haired skin. When the oral cavity is severely affected, there is interference with mastication and swallowing. A viral etiology has been clearly established for these lesions. The second presentation is cutaneous papillomas, which are indistinguishable from the warts that develop on or around mucous membranes. However, they are more frequently solitary and develop on older dogs. Cocker Spaniels and Kerry Blue Terriers may be predisposed. A definitive viral etiology has not been established, and lesions may be confused with cutaneous tags. Recently, a syndrome characterized by papillomatosis of one or more footpads has been described. Clinically, lesions appear as multiple, raised keratin horns. A viral etiology has been suggested but not proven. The third presentation is cutaneous inverted papillomas, which have more in common clinically with intracutaneous cornifying epitheliomas. In this disease of young, mature dogs, lesions most commonly develop on the ventral abdomen where they appear as raised papulonodules with a keratotic center. Infrequently, viral papillomas in dogs may progress to invasive squamous cell carcinomas.
© Dan Honovich Photography 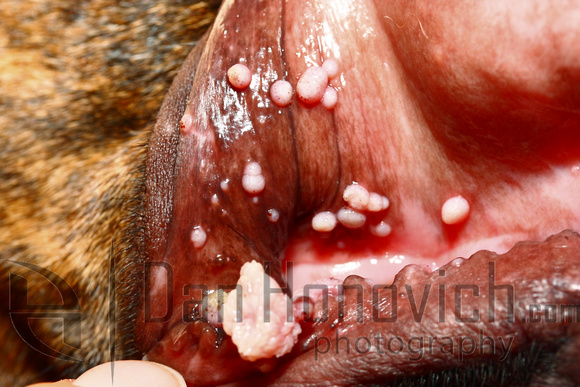